Lots of good showdowns this weekend to talk about, and we hit on a bunch, but that’s just the beginning.  What we’re really here to do is talk about the playoffs! Where do we know more about automatic bids? Which at-large teams have a good shot as it stands right now? Who might get the No. 1 seeds? There’s still three weeks left but it’s time to get in the swing of things. Plus, which are the teams on the rise? What key highlights happened below the radar? Pat and Keith answer those questions, plus hand out their game balls, on this week’s Around the Nation Podcast. 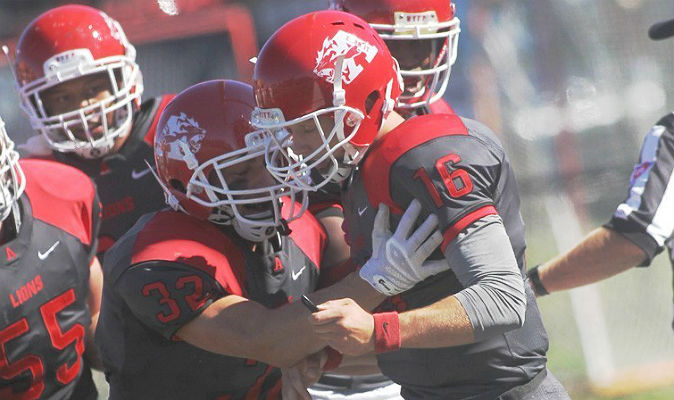 Everything that Week 7 was not, in terms of big matchups, Week 8 is. There are no fewer than five nationally significant major clashes, plus several more games that will greatly impact conference races. Here’s a quick list, in rough order of importance:

Those are the big five. For the uninitiated, one might assume the clash of undefeated teams is the biggest, but in all these matchups, there’s some nuance. Three top-five teams are at home, where they rarely lose. Meantime, UW-Oshkosh’s loss was to non-Division-III Robert Morris-Chicago, so when it comes to playoff positioning, we can toss the 23-21 Week 1 result right out the window. North Central’s two losses are to Platteville, in overtime, and to Wesley, on a two-point conversion with seven seconds left. The Cardinals blew three-touchdown leads in both games. Rowan’s loss is by three, to No. 23 Salisbury, Texas Lutheran’s is by eight to No. 14 Hardin-Simmons, and Platteville’s is by 10, to No. 6 UW-Whitewater. Platteville also beat Dubuque, which manhandled then-No. 8 Wartburg last week, 31-7 back in September.

In essence, each one of those 10 teams is powerful. One tier below, we have:

Basically, it’s one big slobberknocker. And if the above intro just looks like a list of games, names and records to you, then that’s where Around the Nation columnist Ryan Tipps, editor and publisher Pat Coleman and I come in. Our job is to sort out this Battle Royale for you so you can make sense of Week 8. You’ll have your eyes on one game, more than likely, but what else should you be paying attention to? Below the radar or clearly on it, we’ll show you the way.

Pick a team with a losing record to win

Pick a team with a winning record to lose