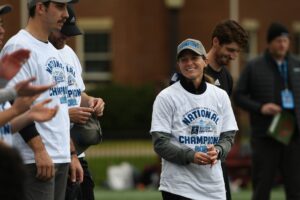 Welcome back to my D3hoops.com Top 25 ballot blogs. I apologize for not getting my Week 1 ballot out as expected. The combination of basketball games (three) and Division III Men’s Soccer Championships coupled with some personal distractions caused this to be put on the back burner. I am hoping to make up at least by showing you my ballots so far in this blog. I will try and provide some comments about some of the teams, though not all (especially to keep these blogs shorter).

Please remember I am just one voter of 25 in this poll and I have never pretended to be one who is absolutely right on these nor do I pretend I am not wrong.

First, here is a reminder at my preseason ballot and a look at how I voted in Week 1 (Nov. 28):

Note: For both the preseason and Week 1 ballots, I did not refer back to how I had previously voted. Neither the end of last season or my preseason ballot. No notes, eye on positions, nothing. I certainly remembered a few items like Randolph-Macon had been my top selection, but nothing more significant.

That said, this week I went back to my more normal voting methods. I write down my previous ballot, then write down notes on results alongside each team, write additional note the print out receive, and then make decisions from there and finish my new ballot along side the old. I went back to it mainly because I noticed prior to my Week 2 ballot I had lost track of a couple of teams between Preseason and Week 1 that I would have spotted had the regular system been in place. So apologies to Dubuque, especially. They fell out of my ballot on Week 1 for no really good reasons, at the time. (I didn’t just put them back this week, the loss to Central gave me pause.)

Now to Week 2’s ballot. I may comment on a few of them: Jahn Hines is leading CNU in scoring, but the Captains have a lot of weapons that make them the best team in DIII. Brandon Roughley and the William Ephs are undefeated through the first-third of their season. (I’m shamelessly getting a pic of Roughley in as he’s a fellow Sarum Knight.)

9 – Williams (up 1)
I am not going to lie, I’m nervous about the Ephs. Their schedule is nothing to crow about, but at least they haven’t taken an early season loss that leaves everyone scratching their heads. The win over RPI stood out and gave me some confidence, though in the Top 10 feels too high. But as always, gaps develop on ballots and teams have to fill slots one wouldn’t have expected. Oswego has lost two of their tougher games so far this season – that could be a concern.

14 – Oswego (down 7)
I think the Lakers are going to be a very good team and likely will win the SUNYAC, but they have already stumbled in a couple big tests. Losing to Nazareth (likely one of the top three teams in the region) is one thing and losing to Brockport isn’t a shocking result … but the loss to Brockport was at home and the offense barely scored xx. It is a bit concerning and I likely am holding on to Oswego a bit more than I should – and I likey should have had them behind Nazareth at this point. Heidelberg’s win over Mount Union put them back on the ballot. (Courtesy: Alexis Calhoun/Heidelberg Athletics)

18 – Heidelberg (unranked)
I’ve been a bit yo-yo with the Student Princes. Part of that is similar to what happened with Dubuque and my process with my Preseason and Week 1 ballots, but the other was I may have overreacted to the UWW loss and the tight outcome against Bluffton. I still think Heidelberg will be part of the absolute battle atop the OAC. Muhlenberg’s only loss this season is an overtime defeat to Swarthmore. (Courtesy: Muhlenberg Athletics)

21 – Muhlenberg (unranked)
Going into the season, I had my eyes on Gettysburg as being a threat to the top two in the conference (and I bought in to that too much) – I should have remembered some notes I left myself at the end of last season. The Mules (or is it Muhls?) have been a sneaky threat for a few seasons now and had more weapons going into this season than I remembered. Muhlenberg beating Johns Hopkins (first loss other than to Swarthmore in several years) was a bit surprising considering how JHU has been playing, but not when one remembers how much of a threat Kevin Hopkins’s squad really is.

22 – Wheaton (Ill.) (unranked)
I finally got a CCIW team on my ballot. I like what the Thunder have on paper, I just for some reason always want to see what happens ahead of them. I finally told myself to stop waiting.

24 – Catholic (unranked)
I could have gone a bunch of different directions looking for the final team to add to my ballot. I felt stuck and dove into several corners looking for what I was missing .., and ultimately the Cardinals stood out. DJ Campbell is leading Stockton in scoring (21.9 ppg) and rebounding (5.7 rpg) while taking twice as many shots as anyone else. (Courtesy: Stockton Athletics)

25 – Stockton (unchanged)
I am unsure if the Ospreys are a Top 25 team right now. I’ve left them on my ballot knowing they are down a few starters and other key guys haven’t been a full strength. My concern is I don’t think Stockton is the best of the conference (Rowan beat them good already this season; but has stumbled themselves) and I don’t know if the NJAC will do more than beat the heck out of themselves. Unsure when the next game will be to answer questions (other than a loss).

Mary Hardin-Baylor (previously 15)
Once again the Crusaders have had a turbulent start to the season. I loved that they went to the West Coast and got two quality wins with one interesting loss. However, a month off followed and that resulted in stubbing their toes again dropping the next game to Concordia-Texas. We will have to wait a bit longer to see if UMHB is going to be what we expected this season, but any at-large back-up plan is already in jeopardy. WPI is off my ballot though is still a team I think we will still be talking about in March. (Courtesy: WPI Athletics)

WPI (previously 19)
I may be heavy-handed here with WPI, but I’ve been unnerved since the first game of the season (yes, I know it was a midnight game). Their schedule hasn’t been great other than their game against Hamilton which they loss. I think I’m going to wait and see … on a team, again, I was high on to start.

Hope (previously 20)
The Dutch have had a good start to the season. A loss to UW-Oshkosh isn’t bad and really the loss to Hanover isn’t too bad, either. However, when I’m looking for reasons to get other teams that I think deserve to be on my ballot I start to nit-pick for reasons to remove teams. Two-losses at this point along with a loss to the Panthers (which I don’t think is a Top 25 team) was my reasoning this week.

WashU (previously 24)
Like others, I think the Bear are going to be a very good team this season, but when looking for reasons to get other teams on the ballot kinks are magnified. A one-point win (following a loss) to Webster, a one-point win over 2-5 Augustana, and then the loss to Pomona-Pitzer (who I thought was going to be good but is 5-4 right now).

Again, I have never said I think I know who are the best teams, the Top 25 order, etc. The one theme over the last decade (or more) is how much more difficult it is to narrow things down each ballot. There are so many teams that have legit points and arguments while also having their own flaws. There is a reason there are 25 voters, and arguably have even more, for this poll – there needs to be that many opinions to truly suss out who the best are in Division III.