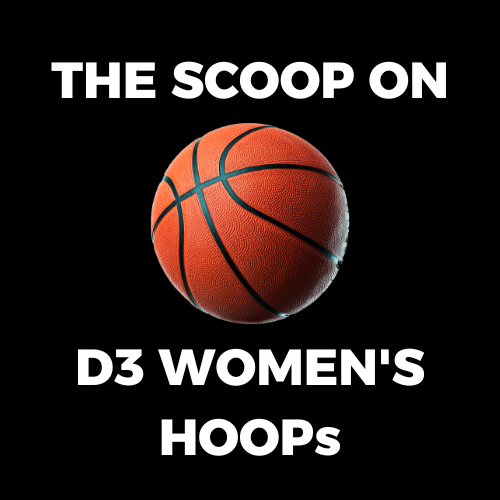 It was yet another action-packed Wednesday night in the world of D3 women’s hoops last evening, and before looking ahead to the weekend, I’m taking a look back on some of my biggest takeaways from the results we saw in yesterday’s contests…

Let me start with the rematch…the showdown…the battle between the MIAA’s best. Yes, Hope and Trine, the longtime rivals met for the second time this year, this time at Trine, and Hope made its presence known, taking the Thunder down, 83-69. Hope led 26-11 after the first quarter and seemed in rhythm all the way through. 11 turnovers isn’t terrible, especially when you have 19 assists, and Claire Baugley was fantastic all evening. The Hope forward played 32 minutes, scoring 22 points with five assists, four rebounds, and two steals, guiding the Flying Dutch on both ends of the floor. This might be the best performance I’ve seen out of Hope all year, bringing back memories of those games from years past, when you would be hyped to see Hope tested against a top-ranked opponent, only to see them prevail by 10 or more. Hope will move up for me in next week’s ballot…I don’t know how high, but they’ll move up.

UW-River Falls provided us our regular Wednesday WIAC upset, as interim head coach Shelby Lyman hed her team in perhaps the biggest home victory for the Falcons this season. Unranked UWRF took down #14 UW-Eau Claire by a sizable 81-70 margin, outscoring the Blugolds in each of the final three quarters after finishing the first tied at 23. UWEC shot above 40%, but struggled from three-point range (27%). The only statistic in which the Falcons really had an advantage, box-score wise, were in terms of shooting percentage (49%) and 3-point percentage (36%). Ultimately, those four more three-pointers could have been the difference, as watching, neither team truly “dominated” the other. In fact, the final score really doesn’t tell just how close this one was.

Speaking of close, I’d be remiss if not to mention the crazy finish in UW-Oshkosh’s battle at UW-Platteville. With under five seconds left in OT, the game tied at 59, UWO was still dribbling atop the key. But then Ava Douglas made a dash towards the rim, trying to get off the Titans’ last shot from closer range. Her shot did not fall in, but she was fouled, and with 0.2 seconds on the clock, went 1/2 from the line, winning the game, 60-59, for Oshkosh. We talk all the time about teams we “wouldn’t want to face in the tournament”…I’m convinced UW-Platteville could win in the NCAA Tournament. I know it might sound crazy, saying that about a sub-.500 team, but I really believe it. Platteville has continued showing up in the big moments (like the win at Whitewater) and has a number of playmakers who are really tough to defend. And for my second hot take, I really think it’s about time Oshkosh is ranked. The quality of the schedule, the wins in WIAC play…it’s all shaping into a great resume at this point in the season.

I mentioned #23 Washington & Jefferson as my dubious pick on Hoopsville last week, and Chatham nearly shocked W&J on its home court last night, with the Presidents narrowly escaping in a 69-66 win. Interestingly enough, Chatham shot just 29% from the field, compared to W&J’s 45%, though they connected on 11 three-pointer’s compared to W&J’s six. But the big number was the turnovers from W&J 22 to be exact. That led to 24 points for Chatham, and made it a much closer game than anticipated down the stretch.

There was no better defensive performance last night than Whitewater’s, as the #24 Warhawks took it to UW-La Crosse in a game that was not very close at any point, much to my surprise. UWL’s defense had been tremendous through the year, but it was UWW’s defense that looked like the WIAC’s best, not allowing a single UWL player to score double figures in a 66-36 win. The Warhawks never allowed more than 10 points in any one quarter.

Carthage was #103 by Massey, Carroll was #32 entering last night’s CCIW duel at Carroll. Carthage nearly pulled off the upset, leading 69-66 with a few seconds left in regulation. But Brooke Foster came up with a huge three-pointer at the buzzer for Carroll, sending the game into OT. Three straight free throws late in OT allowed Carroll to gain a five-point lead, and hold on for an 82-75 win. There are several teams out there right now, including Whitewater, Chicago, and Millikin, who are rooting for Carroll to keep winning. If Carroll can stay in the win column and end up regionally ranked, it would add another RRO win to those teams’ resumes.

That’s all for today. As for the news on Mary Hardin-Baylor head coach Mark Morefield, who was relieved of his position on Tuesday, I have been able to verify reports that his firing was at least in part due to a November practice incident in which a player went down with a season-ending injury after being rolled upon by a teammate. Morefield then used an expletive twice when addressing the team as to why the injury should not have occurred. That is all we have right now, as verified by sources, but will continue working this. I know several others are as well.

Anyway, hope you have a great day, and as always, feel free to reach out with any questions/comments/feedback you might have. Email is rileyzayas@gmail.com. I always enjoy hearing from the readers.

We’re back after a Friday night that saw some interesting results in the UAA to say the least. You just never know what to expect from these leagues that are seven and eight teams deep. This was something Scott Peterson, Dave McHugh, and I discussed on Hoopsville Thursday night. If you haven’t gotten a chance to watch that yet, there was a lot of WBB represented throughout the entire show, with the D3 WBB Top 25 panel in addition to interviews with Trinity (TX) HC Cameron Hill and Smith HC Lynn Hersey.

Now let’s get into it!

Looking ahead to today…what game’s should you be paying attention to? Here’s a couple

Kept it short on this Saturday morning, but hope you get the chance to watch some great basketball at some point today. There are so many contests playing out from coast-to-coast on this mid-January afternoon. In case you missed it, the Pre-Championship manual was released by the NCAA yesterday morning. I’ll link it below. Until tomorrow’s post, have a great day, God Bless.

Planning to put out a post later tonight/early tomorrow looking at the top games of the day and what we have on tap for Saturday’s slate, but sometimes news comes up that can’t wait. A few minutes ago, I found out that the Pre-Championship manual for 2022-2023 had been released by the NCAA, including some great information about strength of schedule calculations, important dates (including when each regional ranking will be posted), and future NCAA tournament dates.

One notable exclusion is the fact that unlike the men’s manual, there is no regional rankings section in this publication. The men’s manual broke down the number of eligible teams in each region and also noted how many teams from each region would be included in each edition of the rankings. If anyone reading this knows why that was excluded, it’d be much appreciated to have that info.

Still going through all of it now, but wanted to post the link here that way you all can go through it and have it on hand as we get closer and closer to NCAA Tournament selection time. Hope you’re having a great day!

I’m back with another Top 25 ballot breakdown as I look back on the week that was in D3 women’s hoops and prepare to file my ballot for D3hoops.com. This wasn’t easy, as usual, because of the sheer number of quality teams right now in the division. But here we go… (as always, feel free to comment below or email me at rileyzayas@gmail.com with questions/comments/feedback/thoughts).

Welcome back to this Sunday morning edition of The Scoop on D3 Women’s Hoops. Wow, is it tough to remember the last time Hope lost to a team not named Trine. But here we are…let’s get into it and what unfolded in yesterday’s action!

Alright, going to shift my attention to the UAA and my Top 25 ballot, which I hope to have out much earlier tomorrow than I did last week (we’ll see…). I can tell you Trinity (TX) will stay as my #1 (I know, no big surprise there), but after that, it will be interesting. Until tomorrow’s post, have a great rest of your weekend, enjoy the NFL playoffs, and God Bless.