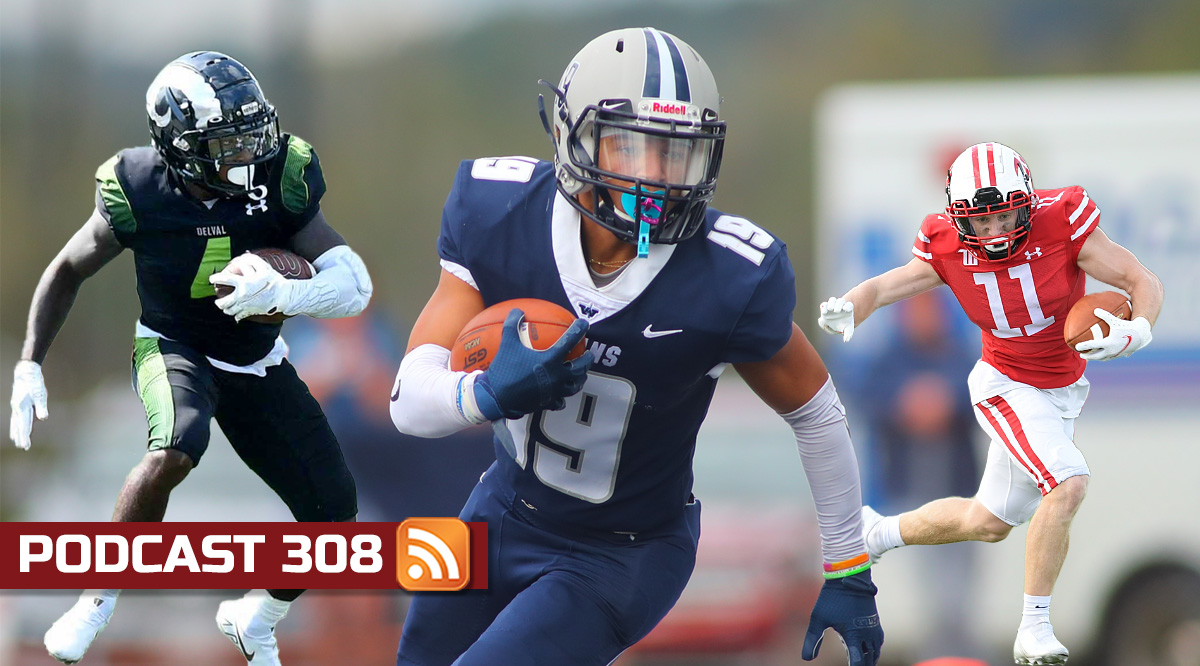 We’re getting ready to kick it all off with the first week of Division III football games for 2022 this weekend, and this week’s podcast takes you around to the big stories and big things we’re watching across Division III this season. We take it on, region by region. What’s fun in the 1? What’s new in the 2? What do we see in the 3? What’s in store in the 4? Who’ll thrive in the 5? What’s in the mix in the 6? Pat and Greg run it all down, along with special guest Frank Rossi of In the Huddle weighing in on Regions 1 and 2.

Plus, we know — we know, sometimes it’s hard to pay attention in the offseason. If that’s you, never fear — Pat runs down the big news from the offseason, in song form. Yes, in song form — picture the Yakko’s World song from Animaniacs, and if that doesn’t resonate with your generation, just know we tested it against a 9-year-old, a 20-year-old, a 39-year-old and a 49-year-old and they had all heard the original. Lyrics below, in case it’s too fast to follow!

There are a number of big games — rest assured we’ll talk plenty about UW-Whitewater at St. John’s and Muhlenberg at Mary Hardin-Baylor in other ways before those games kick off, so we focus on two additional games to watch.

UMHB won the national title and blew the ’19 champs away
And 36 weeks later, offseason’s over and let’s all get ready to play
Coach Fred retired and Jeff Thorne got hired at D-I so both guys are gone
So how many coaches still left have a title? It turns out the answer is none.

Hilbert is taking the field this season, with seven games all on the slate
And 229 others are hoping a postseason trip is their fate

(Sorry, NESCAC, let us know when you are ready for the playoffs)

The Carousel turned and coaches were spurned with many more moving around
Defiance keeps turning, Alvernia’s learning it’s hard to get teams off the ground
Jim Collins is back and the bottom of the PAC sees new coaches at Bethany and Thiel
Three guys from Columbia, while at UW-Platteville they gave an assistant a deal.

(Seriously, four coaches on the website and three are former Oshkosh assistants)

No one got drafted, yes D-III got shafted, with two guys on free-agent deals
While HSU managed to find an opponent for happier playoff reveals
The first month’s obsession will make an impression, with Whitewater up at St. John’s
Then hosting the Cru, while there’s Muhlenberg too, Wheaton, Trinity chase Walnut and Bronze.

Hopefully COVID won’t be a big deal and we can play all of our games!
And 16 weeks later we’ll know all the scores and then you can learn lots of new names.

And here’s what we have for the ’22 season en route to Stagg Bowl 49
The Cru down in Belton with defense reloading and Kyle King, QB divine
The Raiders in Purple might almost be sleepers with two titles in the last nine
and YOU DUB DUB Whitewater lost some big players but probably looks to be fine

Remember the Stagg Bowl is now in Annapolis, that’s where you’re wanting to be.
No matter what happens at least more than just two teams
have some good chances
to win a few playoff games,
If the committee will give them a bid
So you better just go win your league.