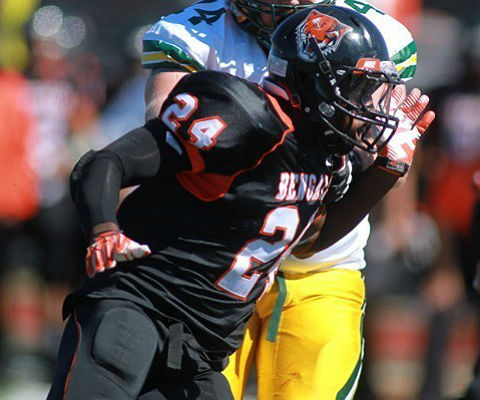 Buff State’s defensive side of the ball will need to come through vs. Ithaca. (Buffalo State athletics photo)

Not every week is filled with top-25 clashes and rivalry games when we look for intriguing matchups across the nation. But with more than 200 teams in action on a given weekend, we usually end up with our fair share of dramatic finishes, milestones and outstanding performances. Some can be anticipated if you know where to look.

That’s where Pat Coleman, Ryan Tipps and I come in. We’ll take you on a quick whirl around the country so you know which games to keep an eye on while you’re doing what you normally do on Saturdays, and we’ll keep it from feeling like a whirlwind.

Game of the week
Keith’s take: East Texas Baptist at Texas Lutheran. It’s between this and the Lyco-Del Val game for me, and this matchup of ‘others receiving votes’ teams gets the nod because of the potential for fireworks. In the most amazing stat of the year possibly, ETBU, after allowing 98 points to a scholarship-level opponent in Week 1, is 3-1 and already back in the positive point differential for the season, on the strength of the country’s fourth-best offense. Yet TLU hasn’t scored fewer than 37 points in a game itself. ETBU QB Josh Warbington has 12 TDs, 3 INTs and three 350+ yard passing games. TLU RB Marquis Barrolle is rushing for 181 yards a game and has 10 touchdowns. But the clincher is the playoff implications; In a conference with No. 2 Mary Hardin-Baylor, ETBU needs every win in case it has to make an at-large case for a postseason spot. In Pool B, even at 5-0, Texas Lutheran remembers being shunned last season with just one loss. It’s an under-the-lights clash we can all take an interest in for the potential big numbers and the trickle-down effect.
Ryan’s take: Buffalo State at No. 13 Ithaca. Were it not for Buff’s narrow loss to Alfred a couple of weeks back, we’d be seeing two undefeated teams squaring off here. Despite a slow start in the opener, Ithaca has excelled in conference play, giving Utica its only loss and beating Alfred. On paper, the edge goes to Buffalo State, but the reality is that Ithaca hasn’t been giving up the kind of big points that the Bengals have been. And if the Bombers’ offense happens to be slumping at the half or in the third quarter, a good defense is always going to keep them in the game.
Pat’s take: No. 20 Lycoming at Delaware Valley. These MAC elimination games are going to be a brutal slog and this sounds like it’s going to be a hard-fought battle. Delaware Valley can score in bunches (49.8 points per game), while Lycoming hasn’t allowed more than 14 in a game all season. Lyco probably would like to have one more season of Tanner Troutman just for this game alone, to cover Rasheed Bailey, who is an electrifying receiver, by all accounts. Would love to see which contrast in styles wins out here.

Surprisingly close game
Keith’s take: Chicago at Trinity (Texas). The Maroons are 4-0. The Tigers are 1-4. And while that would normally make for a pretty straightforward winner, they move in completely different D-III circles. Chicago’s wins are against teams we ranked 84, 89, 213 and 217 in the 1-244 ranking in Kickoff. The Tigers losses are to teams we ranked 19, 37, 50 and 179. Preseason rankings don’t tell the whole story, but neither does just glancing at a record. Trinity’s talent should match up better with Chicago than it did with, say, Pacific Lutheran. That means the Maroons will have to keep playing outstanding defense. They’re currently allowing just 190.3 yards per game, third nationally behind Mount Union and UW-Whitewater.
Ryan’s take: Crown at Greenville. I felt like going deep into the conference rankings to find this week’s game, which is a great example of misdirection. Greenville sits at 4-1; Crown is winless. Those records seem to be in complete opposite directions until you consider that Greenville’s wins come against teams that are a combined 4-16. The Panthers’ one loss came against a 2-2 CCIW team. Crown, on the other hand, has played teams that are a combined 20-4, including an undefeated MIAC team. I expect the Storm to be able to hang right with Greenville, and I’d even wager they’ll pull off the upset.
Pat’s take: Texas Lutheran at East Texas Baptist. Actually, I just think this will be an awesome game and didn’t have room for two game of the week picks. Expecting an entertaining back-and-forth game worthy of two Little 12 teams, even if only one of them is still in the American Southwest Conference.

Most likely Top 25 team to be upset
Keith’s take: No. 7 Wartburg. Coe, Saturday’s host, is off to a 2-2 start, with losses to teams currently ranked No. 16 (UW-Stevens Point) and No. 18 (Wheaton). More importantly than what might be a deceptive record is the idea that they simply have Wartburg’s number. The Knights haven’t beaten the Kohawks since 2010, after Coe rallied from down 17-0 to win by a field goal in 2011, won by four touchdowns in 2012 and scored 24 second-half points last year to become the only team besides Bethel to beat Wartburg. It’s a new year, and the Knights are 4-0 with a great defense (12th nationally at 11.3 points per game) and the Royals already in the rear-view mirror. Coe QB Josh Rekers had success passing against both Wheaton and UW-SP and will be a challenge though.
Ryan’s take: No 8 Hobart. Springfield always brings a good bit of quality to the table, but, since being in the LL, the team has yet been able to get over the hump against Hobart. The Statesmen have look good this year, but not flawless. Dickinson was able to play its way back into the opener; Endicott, too, scored the bulk of its points in the fourth quarter. A cushion going into the final period would help Hobart here, because high-scoring fourths are not foreign to the Pride.
Pat’s take: No. 13 Ithaca. I don’t have a strong feeling about anyone this week but perhaps Buffalo State can be the team to score more than 16 points on the Bombers. They will definitely need to if they want to win at Butterfield Stadium.

Pick a team that faces much better competition this week than last, and tell us how it fares.
Keith’s take: Berry. The Vikings won the first game in program history, 29-23, last week against Wash. U. This week they face Centre, which hung 50 on that same Bears group two weeks ago. The Colonels have outscored opponents by a 38-17 average in its 4-0 start, and rush for 244 of their 443 yards of weekly offense. Berry will likely have to wait for its first win streak.
Ryan’s take: Willamette. The swing is big if you’re going up against football newbie George Fox one week and then turning around to face Whitworth the next. Whitworth bested its weaker foes but is on a two-game skid against some tougher teams. I’m not sure that a win here would be enough to lift the Bearcats into the Top 25, but I wouldn’t be surprised if a couple of voters will bump Willamette up a spot or two after winning.
Pat’s take: No. 3 Mount Union, at Ohio Northern. I was reviewing old Top 25 polls this week — the coaches poll, mind you — in helping a school out on a research project and was reminded that in 2005, when Ohio Northern won at Mount Union, the Purple Raiders actually fell to No. 9 in the AFCA Top 25. It’s hard to imagine the Purple Raiders ever being just the ninth-best team in Division III. We’re in our tenth season since then and Mount Union has barely skipped a beat. One beat at most. They won’t skip a beat this week. (For the record, Mount Union fell to No. 6 in that week’s D3football.com Top 25.)

Which one of the surprise unbeatens remains that way?
Keith’s take: Luther. The Norse haven’t beaten Central since 2008, and they’re hosting in front of a homecoming crowd that doesn’t really know what it’s like to cheer for a 4-0 team. So not only should it be a wild atmosphere, but the Norse seem up to the challenge. Josh Vos and DB-turned-QB JJ Sirios are each rushing for more than 100 yards per game, and Central hasn’t been great at run defense (166 yards per game). Luther’s rushing offense is No. 2 nationally, sandwiched between more familiar option teams Maine Maritime and Springfield. It’s the Norse and the Dutch, so why wouldn’t one side make history?
Ryan’s take: UW-Stevens Point. Then again, the Pointers are going up against the only team in the WIAC that is currently winless, UW-Eau Claire. UW-EC has had one of the toughest schedules to date in Division III: They started off against St. Thomas, then played St. John’s, Wheaton and UW-Platteville. Had Eau Claire not gotten pasted against Platteville, I might think they’d have the spark to play a spoiler role. Instead, Stevens Point will have one last opportunity to work out the kinks before going on the road to Platteville next weekend.
Pat’s take: Bridgewater (Va.). It’s an unexpected battle of unbeatens between Bridgewater and Emory and Henry, and if this were 2000, this would be front-page news. But since both programs have been down for the better part of a decade, at least, it’s slipped well under the radar. I like Bridgewater at home, but E&H has played three road games out of four, so the road won’t be unfamiliar.

Which player put up huge numbers in Week 5 and will do it again this week?
Keith’s take: Satiir Stevenson, safety for Guilford. Ryan turned his answers in first and yoked my original pick. (Fun fact: I’m told it’s cog-lin, not cough). The Quakers might seem like they’re all offense, but Stevenson’s 22 tackles last week against Washington & Lee were the second highest single-game total in D-III this season. This week’s opponent, Shenandoah, happens to be the ODAC’s best rushing offense, at 289 yards per game, so they’ll need another big tackling effort to slow down the Hornets and 5-9 all-purpose threat Cedrick Delaney.
Ryan’s take: Pete Coughlin, quarterback for Washington and Jefferson. Last week, the big numbers (383 passing yards, six touchdowns) really mattered because the game was against rival Thomas More and is generally the matchup that yields the PAC’s playoff contender. It would be of little surprise to see him fling around those kinds of numbers again, with winless Grove City on the docket. The only limiting factor will be if Coughlin sits out most or all of the second half.
Pat’s take: Withler Marcelin, Rowan running back. Good category because I was feeling bad about him not having a spot for him on the D3football.com Team of the Week last week. He ran for 245 yards and three touchdowns on 26 carries, with scores of 28, 54 and 75 yards vs. Cortland State and if Rowan needs him to, he’ll have a big game vs. William Paterson.

They’ll be on your radar
Keith’s take: Thomas More. It’s deflating to lose the conference matchup that often defines the season, so I’m interesting in seeing how the Saints get up to face Geneva. Thomas More seemed like it had the makings of a playoff-bound team when I saw it in Week 1, but after the W&J loss, it’s out of their hands. The Wesley loss means at-large is probably out too, which means they’ll have to get some help. But you can’t take advantage of help if you don’t take care of your own business first.
Ryan’s take: The Trine at Olivet matchup. I know we usually pick a single team here, but the MIAA has been next to impossible to get a handle on this fall. It’s nice that the two teams with the best overall records are meeting so early in conference play. We’ll get a bit of clarity in Michigan after Saturday.
Pat’s take: Gustavus Adolphus. This is the end of the 6-0 run we’ve been talking about since the preseason. St. Olaf won’t be able to stop the Golden Gusties’ offense.