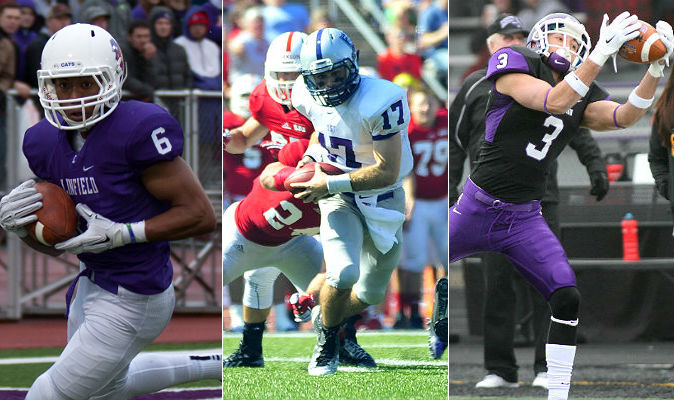 We often use the phrase “Purple Powers” to refer to Mount Union and UW-Whitewater, since they’ve faced off in all but one Stagg Bowl since 2005, with the Warhawks winning six. In 2012, Mount Union beat St. Thomas. The last team besides those three to win in Salem? That would be Linfield, in 2004, which beat another purple-clad team, Mary-Hardin Baylor, both on that day and in this year’s quarterfinals.

So we’re comfortable calling this year’s four semifinalists, Mount Union, UW-Whitewater, St. Thomas and Linfield, purple powers in their own rights. We can honestly envision any of these teams losing on Saturday, or winning it all. So whatever Division III lacks in final four variety, it makes up for with competitive intrigue. Of the 28 playoff games so far, our panelists have picked all but two (Keith), three (Pat) or four (Ryan) winners correctly, but we might not guess correctly again. We’ll take stabs at it anyway, because readers appreciate it so much.

If I had to characterize this week simply, it would be the brutes (St. Thomas and UW-Whitewater) against the fancy pantses (Linfield and Mount Union). Of course the Wildcats and Purple Raiders are strong and gritty too, and the Tommies and Warhawks have playmakers capable of dazzling, but you’ll see speed and ability to get up the field more from Mount Union and Linfield. St. Thomas and UW-Whitewater would be fine lining up and mauling their opponents.

Around the Nation columnist Ryan Tipps, editor and publisher Pat Coleman and I will go into further detail with our picks below. Disagree? Then please add your picks and insights in the comments section. On Monday’s podcast, Pat and I will revisit the weekend and preview the national championship game.

Keith: UW-Whitewater 34, Mount Union 28
This time last week, I don’t think you could have convinced me to pick the Warhawks over the Purple Raiders. Oh sure, beating playoff-caliber teams 51-7 and 66-7 doesn’t give any clue to how they’ll fare against UW-Whitewater (the Purple Raiders are 3-6, and 0-2 under Vince Kehres). But Mount Union had a dominant defense, a very competent offense and had been my No. 1-ranked team since October. UW-Whitewater had been good, but didn’t have that “it” that their previous championship teams have had, be it at quarterback, in the secondary, down the middle of the defense, at offensive skill positions or on the coaching staff. But in the second half last week against UW-Oshkosh, possibly the best D-III team not still playing this week, I caught a glimpse of “it.” The Warhawks’ offensive line — From left, Jordan Mueller, Mitchell Schauer, Spencer Shier, Austin Jones and Tony Koepnick — were again moving as one on run plays, and providing all the time in the world on pass plays. That’s a problem for Mount Union, because the best part of the defense might be the line, led by Tom Lally and Mike Furda. If the UW-Whitewater offensive line can keep those guys and Mike Vidal and Elijah Berry off Chris Nelson, the Warhawks quarterback will find Marcus Hudson and Joe Worth for big plays, and Jordan Ratliffe will be able to run. Mount Union coach Vince Kehres came through the ranks as a defensive player and coordinator, so there’s no outsmarting him, or a defense anchored on the back end by Gagliardi Trophy final-10 safety Alex Kocheff. But the Warhawks don’t really win by outsmarting teams, they win by wearing them down. I see Mount Union scoring some points, and being in the game late. But if the Warhawks have the ball late in a close game, Mount Union will have to prove why we should expect something different. There have been some epic semifinals in Alliance, and this one might join the ranks. The question is whether the home fans will leave happy, or with a sixth loss to UW-Whitewater in the past six meetings and without a trip to Salem for the first time since 2004.

Ryan: UW-Whitewater 41, Mount Union 31
Not only is this regular matchup not happening in Salem, but I also think that Whitewater will prevent a rematch of the 2012 UMU/UST Stagg Bowl. The Warhawks won me over last week by avenging the regular-season loss to Oshkosh. UW-W has felt the pressure of playing a team close into the third quarter and knows what it takes to end the game with a win. Mount Union hasn’t been in that situation this season, jumping out to early leads and making them stick for the full 60 minutes. There are playmakers all over the field, on both teams and both sides of the ball, and that will make for some really exciting and memorable moments in this matchup — and it will help to keep this game close for much of the time. Ultimately, as in years past, it comes down to me liking the front lines of the Warhawks better than those of the Purple Raiders, and many Stagg Bowls in the past decade have been won in the trenches.

Pat: Mount Union 35, UW-Whitewater 30
We’re in uncharted waters here, with these two teams meeting on Mount Union’s home field, and in my analysis, I’m putting this on the edge on the sidelines, for Mount Union. In previous meetings, I think UWW has had the coaching advantage but with all the changes on that sideline, I have to give Mount Union the benefit of my doubt. Meanwhile, I think these teams are pretty evenly matched. The key matchup, as with every Whitewater-Mount Union game (and probably every Purple Power game) is along the front lines, and I’ll be interested to see how the Purple Raiders, with a few more seniors up front, attack the Warhawks’ offensive line. Jordan Ratliffe has been worked a lot lately and although he seemed not to really feel the 38 carries he got vs. Wheaton, at some point that begins to have an impact. But the other matchup I’m most keyed on is the Whitewater secondary vs. the Mount Union passing game. This is a big test for the Purple Raiders, who haven’t really faced this level of competition this season. The thing I like most about this game, however, is we can focus on the football, and so can the teams. There’s no constant ESPN presence at this game, no banquets, no local community service, just line ’em up and go.

Keith: St. Thomas 28, Linfield 24
Outside of Minnesota, Wisconsin and Ohio, Linfield is probably the sentimental favorite. Let’s start there. After a string of playoff heartbreak, against UW-Whitewater (2009 semifinals), St. Thomas (2010 second round, in overtime), Wesley (2011 second round), UW-Oshkosh (2012 quarterfinals, in overtime) and UW-Whitewater twice more (2013 quarters and 2014 semis), it would be natural to for a neutral fan to pull for a Linfield breakthrough. Then when you add in that they’re still hoisting after games the framed jersey of Parker Moore, the player who was killed near campus in 2014, recently had their play-by-play voice pass away and had a backup quarterback pass for 492 yards in coming from 21 points behind, how could you not pull for the Wildcats? From the Catdome Alumni videos to Coach Joe Smith’s mustache to the comeback last week against UMHB, it just looks like a fun program that represents the spirit of Division III. But, these choices are made with the head, not with the heart (Besides, Glenn Caruso and St. Thomas are fun and equally spirited). I’m drawn to something Wabash coach Erik Raeburn said after last week’s quarterfinal loss to the Tommies; that St. Thomas was able to stack as many as nine in the box because the cornerbacks were taking away the outside receivers. If you listened to our podcast this week, you’d have learned that St. Thomas sacrifices some size for speed on defense, and that Linfield’s wide receivers have gone unheralded much of the season, though they had a huge game against UMHB last week. If the matchup favors the corners again, the Tommies are fairly open about their plan to stop Spencer Payne and the rushing attack, then get after the Linfield quarterback. And frankly, it doesn’t matter to me which one it is, since in six-plus quarters of Tom Knecht, Linfield hasn’t slowed down from Sam Riddle’s pace. I don’t care about Linfield being on the road either; an elite team can win on any field. But between the secondary/wide receiver matchup, and the fact that 6-foot-9, 350-pound tackle David Simmet will likely be blocking Linfield’s best defensive player, Alex Hoff (unless, of course, Jackson Vaughan moves Hoff around), the matchups seem to favor the Tommies. One more ring of the victory bell is possible.

Ryan: St. Thomas 31, Linfield 24
We’re at the point in the season where every team has weapons on both offense and defense, every team is tested against good competition, and every team has a legitimate shot at making it to Salem — and winning it all. And those facts make it difficult to create separation between these Linfield and St. Thomas. As with last week, the health of Linfield quarterback Sam Riddle is crucial. With him, I would give the Wildcats the nod in this game. Without him, well… I was pleased to see how well Tom Knecht stepped up against Mary Hardin-Baylor last week, especially in the second half. But I think the team needs Riddle at 100 percent in order to advance. There’s just no margin for error at this level of the game. Both defenses should stand tall this weekend, and it would be no surprise to see those units contributing to the scoreboard. Linfield will also be hurt by UST’s ability to take away the run game and force the Wildcats to throw the ball. Pinning Linfield into one-dimensional play will help the Tommies come out on top.

Pat: St. Thomas 24, Linfield 17
We’ve seen St. Thomas dismantle basically everyone this year, including some pretty good teams. And I’ve seen a couple of those games in person, along with having seen Linfield in-person once. I’m savvy enough to understand that Linfield having or not having quarterback Sam Riddle is not the only factor to this game, nor is any possible limitation to St. Thomas running back Jordan Roberts. Similar to what I said about the UWW-Mount Union game, the lines and that battle up front will be a huge factor here. St. Thomas’ secondary will get a test this week, similar to what it saw at the end of the regular season with Gustavus Adolphus. Even though the Gusties were just 7-3 overall, they had a national-level passing attack and the Tommies held them more than a hundred yards below their average. So Linfield is the best passing attack St. Thomas has seen and St. Thomas is the best rushing attack Linfield has faced. I’m meandering around this because in the end, I’m picking against the team that’s No. 1 in my poll.

We invite you to add your predictions in the comments below, along with our own Adam Turer, or tweet at us at @D3Keith, @NewsTipps and @d3football. Download the Around the Nation podcast on Mondays, where Pat and Keith review the picks and the highlights from the semifinal round.