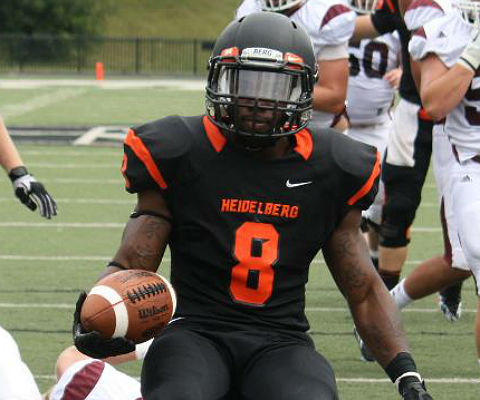 Cartel Brooks and the rest of the Heidelberg Student Princes had their way with Alma in Week 1. This week’s opponent will be much more challenging.
Heidelberg athletics photo

Late September in Division III is a special time.

In some places, conference play gets underway, and for those who aren’t quite there yet, it’s road trip time! No. 1 UW-Whitewater has a jaunt to New Jersey coming down the ‘pike, No. 2 Mary Hardin-Baylor is cheesing on the way to Wisconsin, No. 6 Linfield is going back to Cali and Coast Guard is going to Farmville.

The weather cools off a bit, so players at least avoid seeing heat blur as it rises off the turf. That makes it a great weekend to take in a game quite literally from coast (at Mass. Maritime, against Maine Maritime in the 42nd Admiral’s Cup) to coast (at Cal Lutheran, against Willamette in Thousand Oaks, Calif., at its “work of art” stadium a few miles inland) and everywhere in between.

Here’s a rundown from Pat Coleman, Ryan Tipps and I of which among the 244 teams most bears watching in Week 3:

Game of the week
Keith’s take: No. 7 UW-Platteville at No. 5 North Central. Big games abound this week, but it’s difficult to look past a clash of top-10 teams. This matchup was such a letdown in last year’s playoff second round that it was the fifth mentioned in the eight-game roundup that week. This time instead of Stanek vs. Kelly, it’s Dylan Warden and Bryce Corrigan under center, and the defenses perhaps in the spotlight. The Pioneers have allowed just 314 yards per game in wins over Buena Vista and Dubuque, and the Cardinals allowed 195 last week against St. Norbert. It’s the first game at Benedetti-Wehrli Stadium since the playoff clash, and it’s a 6 p.m. kickoff. Giddy up.
Ryan’s take: No. 7 UW-Platteville at No. 5 North Central. The year’s first matchup between top-10 teams hardly needs an explanation as to why it’s worth being the game of the week. The two teams average more than 500 yards of total offense a game, putting them at 18th and 19th nationally in that category. Even more interesting (and more of an “X” factor in this game) is that they each typically win the turnover battles against their opponents.
Pat’s take: No. 16 Heidelberg at No. 10 John Carroll. After last year, when we didn’t get to know how good either of these teams really were until November, we won’t have a Heidelberg Uncertainty Principle (go ahead, Google it) in 2014, at least now as to how these teams stack up against each other. Except that if Mark Myers doesn’t play for John Carroll … we’ll still end up with legitimate questions. “We’re planning on going without him,” JCU coach Tom Arth said in the Cleveland Plain Dealer. “It’s just too early to say. We’re kind of proceeding as if he will not be playing.”

Surprisingly close game
Keith’s take: Morrisville State at St. Lawrence. New York is the home of the close game this week, according to us. Mine’s only a surprise to the naked eye, or those attracted to the 112 points QB Lemar Johnson and the Mustangs have scored in their 2-0 start. But the Saints (1-1) are fourth in the country in total defense (146.5 yards per game) and time of possession (38:17). So whether it’s stopping the Mustangs or keeping the ball away from Johnson’s offense, St. Lawrence has a chance.
Ryan’s take: No. 8 St. John Fisher at Brockport State. One of the best things Brockport State has going for it is its defense, particularly against the pass, and Fisher had nearly 300 yards through the air in the opener against Otterbein. Brockport will stay in this if they can neutralize Fisher’s Tyler Fenti-Nathan Nigolian connection. Brockport has already built up a 2-0 record, including a win over Cortland State, and appears to be a team with more potential to rise.
Pat’s take: Hartwick at No. 19 Ithaca. This offense vs. defense matchup probably favors the defense. Ithaca can almost certainly hold the Hawks under 40. And a little shout-out to North Carolina Wesleyan, which kept its game vs. Christopher Newport closer than most would likely have expected on Thursday night before losing, 31-28.

Most likely Top 25 team to be upset
Keith’s take: No. 19 Ithaca. Ol’ Chalky Coleman down below might end up being correct, but Ryan and I will show some guts and walk out on a limb. Hartwick has flashed impressive offense in its 1-1 start, hitting the 40-point mark and having nearly 500 yards of offense against Western Connecticut and Morrisville State. Wide receiver Tanner Williams had 13 catches for 255 yards and three TDs in the opener, and running back Greg Bell had 51 carries for 331 yards and three TDs last week. The Hawks also handed the Bombers one of their three losses last season, 21-9. Ithaca hung on against Union in Week 1, winning 21-16 when the Dutchmen’s 14-play drive ended with an incomplete pass on fourth and goal, and was not in action last weekend.
Ryan’s take: No. 20 Wheaton. I’m stepping up to own the pick I made in Kickoff, when I said UW-Eau Claire would pull off the most surprising upset of the season. The Blugolds fared very well against St. Thomas but then had got beaten big by St. John’s. Wheaton, in turn, wasn’t flexing a ton of muscle against Kalamazoo last weekend. There’s a lot of opportunity for UW-EC to make a statement here and not stumble winless into conference play.
Pat’s take: None. Among possibilities that would be true upsets (not Rowan/Wesley and certainly not the games between ranked teams), I would say Brockport State over St. John Fisher is the best possibility. But I like the chalk here.

Which team won’t have a great season, but will have a great week?
Keith’s take: East Texas Baptist. The Tigers have Millsaps, trips to Texas Lutheran, Louisiana College and Hardin-Simmons, and a season-ending home game with No. 2 UMHB ahead. That’s five likely losses unless they play better than they have in recent seasons, but this week’s clash with Southwestern is an opportunity to shine. ETBU already had its get-right game, beating Austin 43-27 after giving up 98 to Texas A&M-Commerce. The Tigers are home under their lights against the Pirates, who spent some time this week in the spotlight after earning their program’s first victory. RB Toi Glover, a 1,000-yard back last year, averaged 8.4 yards per carry last week. If he and the Tigers can’t beat Southwestern, the order of things in Texas will be shaken up.
Ryan’s take: Delaware Valley. The Aggies should have a good season, but with Widener and Lycoming being the ones I feel in the driver’s seat of the MAC, Del Val won’t end up with the kind of season the team considers great. This week, Wilkes is on the slate. While the Colonels did win last week, they also got slammed in a shutout loss to Muhlenberg in Week 1. This will be a win for Del Val and should give them some momentum with a few meatier games around the corner.
Pat’s take: Manchester. The Spartans gave up 60 points to a team that took a seven-hour bus ride to get there last week in Buffalo State. That’s not a sign of a team that’s going to play in the postseason. However, Manchester hosts in-state HCAC rival Earlham this week, which has been outscored by 63 points over the first two weeks.

Which player has a breakout game this week?
Keith’s take: Billy Beecher, Case Western Reserve. The Spartans quarterback had been a bit-part player in the past, and took over as the starter in the opener against Carnegie Mellon. In the 30-0 win, he passed for 301 yards and two TDs and rushed for another, so that was probably his breakout game regionally. St. Vincent has allowed 841 yards and 79 points in its opening two losses. Beecher has a chance to put up numbers that garner national attention in this matchup.
Ryan’s take: Mason Blaschke of Trinity (Texas). Rarely in this space do we get to highlight individual players (so thank you for the opportunity, Keith!). Coming off of a wrist injury last season, Blaschke hasn’t really excelled yet this fall. The Tigers are 0-2, and his passing outings have been 208 yards against Howard Payne and just 89 yards against Willamette. There’s more to Blaschke than he’s showing us. He has the right guys to throw to, and sacks haven’t been a particular burden. This week, Trinity plays Sul Ross State, the team that handed Southwestern its first win in the modern era. If Blaschke and the Tigers aren’t dominating here, then we’re looking at a mess of red flags.
Pat’s take: Matthew McDaniels, Merchant Marine. Actually, this is hard, because I kept looking at games and the players that came to mind had already had their breakout games this season. But McDaniels has been somewhat held in check this season. Last week, when he ran for 174 yards as the Mariners’ option quarterback, the team still lost. But a cross-river rivalry like SUNY-Maritime should be more than enough motivation.

The NESCAC starts this week. Give us any prediction.
Keith’s take: Wesleyan struggles for a half, then pulls away from Middlebury. Here are the five NESCAC games; right away, two of the four teams that had losing records last year will get that taste out of their mouths, since 0-8 Hamilton faces 0-8 Tufts and 2-6 Williams hosts 3-5 Bowdoin. But there’s intrigue at the top, too. Preseason favorite (at least according to the Nothing but NESCAC crew who did our picks in Kickoff ’14) Wesleyan has 20 starters back from a 7-1 team. Middlebury was 7-1 last year too, but there’s no more McCallum Foote to lead the way. The Panthers’ eight returning defensive starters can help keep it close for a while, but not forever.
Ryan’s take: Five NESCAC teams will win on Saturday. What? Too easy? Okay, how about Bates will play Amherst neck and neck? The past four meetings between these two teams have seen the Bobcats outscored 119-13. But Bates has shown improvement the past two seasons and has the “problem” of having had some solid competition for its starting spots – as well as some depth. This will be a much better game than people are used to seeing between these two.
Pat’s take: Tufts’ long losing streak continues. I’d have said otherwise if Dave Murray hadn’t been hired at Hamilton over the summer. Murray didn’t have a lot of time to recruit for the Continentals this season but will put a little spark into the program.

They’ll be on your radar
Keith’s take: Rose-Hulman. Duh. After a 40-spot in Week 1 and 74 in Week 2, I’m intrigued by the offense. Defensively, after allowing 68 points and 745 yards to Illinois College, they’re understandably the 220th-ranked defense in the country. This week’s opponent, Hanover, manages to rank worse at 225th, allowing more than seven yards per play, 558 yards per game and 40 points in an 0-2 start against Centre and Thomas More. The Engineers’ equipment manager may want to pack some scoreboard lightbulbs to give to Hanover in case Austin Swenson and the RHIT offense burn them out.
Ryan’s take: Hiram. The Terriers are third in the nation in turnover margin (thanks, in part, to six picks against Denison) and occupy the lone spot atop the NCAC. Well, part of that is because most of the NCAC hasn’t played two games yet like Hiram has, but don’t take this away from them. Hiram paid its dues for many, many, many years in the lower rungs of a middle-of-the-road conference (16th this year in Kickoff). Allegheny is a beatable opponent, which could lock in the team’s best season in years just three weeks into 2014.
Pat’s take: Stevenson. The Mustangs have started off 2-0 and if they can beat Lebanon Valley, they’ll be in the best possible shape as they start running this MAC gantlet. Four of their next five games will be against Albright, Lycoming, Delaware Valley and Widener.