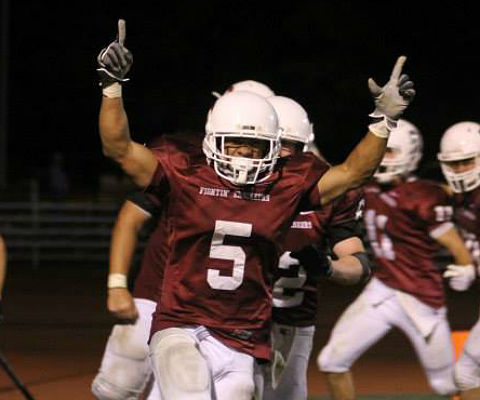 Greg Lee celebrates scoring the winning touchdown in a game that went into three overtimes and tied the record for most points in a game in D-III history.
(Rose-Hulman athletics photo)

On Saturday afternoon the buzz was about the way Wartburg defeated Bethel and kept its early-season surge going at 2-0.

Long after the sun had set, however, Rose-Hulman and Illinois College were still playing, attracting the attention of college football fans across the country and ending up on a little program called SportsCenter. Hard to say that was the most important game of the week, but it certainly was the most intriguing, and suffice it to say that Pat and Keith found a few ways to talk about it.

It’s game that Rose-Hulman and Illinois College players and fans will be talking about for a lifetime.

Meanwhile, game balls were handed out, and more. It’s Week 2 of the retooled Around the Nation Podcast, so listen in.

Plus, the D3football.com Postgame Show is back: Check out highlights and reports from games across Division III. Are we missing your highlights? Post in the comments below.