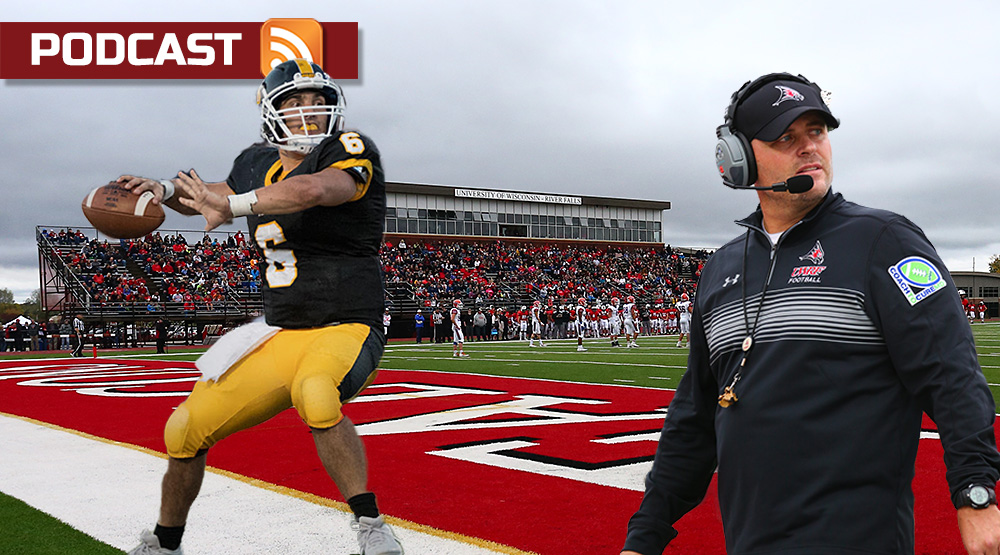 This is really the end of the offseason, right here. Kickoff is out in a week-plus and training camps open at the same time. Coaches are taking the last days off until November, and we’re talking with them about their plans for this season.

Our guests this month are from programs trying to break through into the upper echelons of really tough conferences. Matt Walker, coach of UW-River Falls, has seen the Falcons’ reboot take seven years so far, and he shares some pretty honest thoughts about how long it’s taken. He also talks about his sudden and unexplained departure from DePauw all those years ago.

We’re also joined by Joe Austin, the coach at Southwestern, whose program is entering its sixth season. The Pirates have moved from the SCAC to the American Southwest Conference, and hardly missed a beat last year. What’s it like recruiting in the shadow of Mary Hardin-Baylor? The answer isn’t what you’d expect.

That and more on the July 2018 podcast. The D3football.com Around the Nation Podcast is a regular conversation between Pat Coleman and Keith McMillan and guests covering the wide range of Division III football.

Mentioned in the podcast: New turf going in at Marietta, below. Three weeks into the season a fair amount of the non-conference schedule is in the books, games that provide the basis for much of what we do in terms of ranking conferences twice a season. This week Keith and Pat discuss not only the big games from the past weekend but also take a snapshot of which conferences exceeded expectations and which underperformed.

You can load the podcast page in iTunes or can also get this and any of our future Around the Nation podcasts automatically by subscribing to this RSS feed: http://www.d3blogs.com/d3football/?feed=podcast

The state of Division III football is that Mount Union is forever December-relevant. But in September? Usually we can just presume that the Purple Raiders will get through the regular season unbeaten. (They’ve only lost one regular-season game in the history of D3football.com, after all.)

Now UW-Whitewater has joined Mount Union in that echelon, we’re going to devote a little extra time to covering the two purple powerhouses. When our new site launches, you’ll see that on game day. But in the interim, heck, Mount Union is playing a game just five hours from one of our gurus. Shouldn’t we be there?

So when Neil Seaman makes his first start for the Purple Raiders on Saturday, and they debut a former Kent State regular at defensive tackle and another transfer at corner, sure, we want to be there to see what it looks like.

Great games in the Keystone State (that’s Pennsylvania, for those of you who haven’t seen the license plates) and out West, plus many places in between. Pat Coleman is at the Mount Union/UW-Oshkosh game. Keith McMillan is at Coast Guard/Merchant Marine (after taking in the Western Connecticut/SUNY-Maritime game Friday night), Gordon Mann is at Delaware Valley/Washington and Jefferson and Ryan Tipps is at North Carolina Wesleyan/Hampden-Sydney.