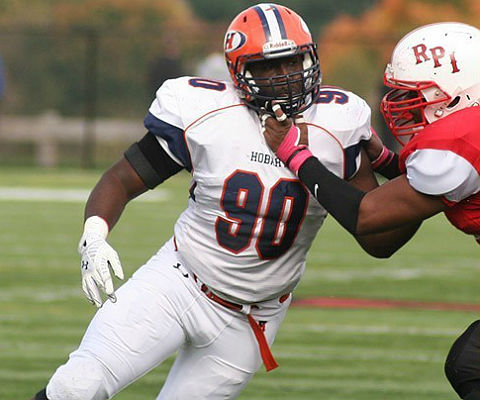 Tyre Coleman needs one sack to move into sole possession of second place all-time in the history of the NCAA tracking stats, and 4.5 to move into a tie for first. (Hobart athletics photo)

Consider for a moment the quality of the 16 teams remaining in the postseason. Nine of them are still unbeaten, and six of the other seven teams have one loss. Together, the teams who will take the fields on Saturday have experienced defeat just nine times, with one of the losses coming to a scholarship-level team and another coming against Mount Union, which is one of the 16 teams still alive.

Saturday’s road teams — the ones which the bracket-makers consider the underdogs — will include Linfield and St. John’s, the past two programs other than Mount Union or UW-Whitewater to win Stagg Bowls. The field still includes both the Purple Raiders and Warhawks, all eight No. 1 and No. 2 seeds, and the top 11 teams in the D3football.com top 25, as well as 13 of the top 14.

In other words, this is the best of the best. The one drawback to having such an expansive playoff is that eight very good seasons come to an end this week. But they do so having satisfied the competitive urge, going against the best the 244-team division has to offer. And the eight that move on to the quarterfinals do so knowing they had to pass pretty serious tests, for the most part, to move on.

The purpose of Triple Take this week is to set the national expectation. We know most folks don’t have the time or inclination to follow all 16 of these teams, or really develop an idea of what we’re in for Saturday. It’s a much more difficult week to forecast than last, but publisher Pat Coleman, national columnist Ryan Tipps and I take a crack at this week’s scores. If you see something on Saturday that runs contrary to the picks you see below, realize you are witnessing history in the making.

We invite you to add your predictions and reasoning in the comments below, or tweet at us at @D3Keith, @NewsTipps and @d3football. Download the Around the Nation podcast on Mondays, where Pat and Keith review the picks and the most recent round of playoffs.