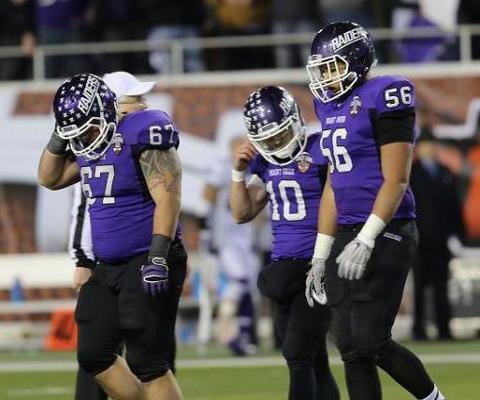 Kevin Burke and the Mount Union offense hangs its heads while leaving the field. (Photo by Steve Frommell, d3photography.com)

Another classic Stagg Bowl, which ends like the previous four Whitewater-Mount Union meetings — with a UW-Whitewater national championship. Pat and Keith talk through the biggest game of the year, the things that plagued the Mount Union offense (or things UW-Whitewater did well on defense), hand out their game balls and wrap up the 2014 season.

Plus, Keith makes a great case for an unexpected name as the D3football.com Coach of the Year. Hear who, and why. And they also came to a consensus on the D3football.com Offensive and Defensive Players of the Year as well. Also, they discuss the Leipold Legacy and more. Thanks for listening to the eighth season of the Around the Nation Podcast! We can recycle last year’s trophy, uniforms and helmet photo, but not last year’s predictions. (City of Salem photo)

Over the past 10 years, every time Mount Union and UW-Whitewater have been in the 32-team field, they’ve met in the Stagg Bowl. For the teams’ ninth clash in Salem, we rounded up an expanded group of prognosticators for Triple Take.

Once we get past the novelty and hype, there’s a game to be played. And no two matchups are the same — casts change, strategies change, weather changes. Last year’s lucky bounces may go another way this year. To break it all down, and give you an idea of what to expect tonight, is our seven-man panel.

We predicted last season (everyone was way off) and every Stagg Bowl since 1999. Don’t like any of the picks you see here? Make your own in the comments below; your insight is welcomed.

Pat Coleman, D3football.com publisher and executive editor
I’ve heard a lot of people compare this game to last year, saying, “how can Mount Union make up 38 points?” The point is, this isn’t 2013 and these are not the 2013 teams. Mount Union just has to score more than UW-Whitewater this time around. What Friday night will show is whether Mount Union has improved enough on defense to hold UWW down. Or whether the 2014 UWW defense can keep Kevin Burke contained, or account for Taurice Scott and Roman Namdar, whom they have never had to deal with before. Because of some of those things, I don’t expect this to be a defensive battle. I expect there will be points scored. This game could come down to a special teams play, and Mount Union has the edge there. But not enough to turn the tide. I look for UW-Whitewater, which has been tested more regularly, to show that here in Salem. UW-Whitewater 34, Mount Union 31.

Keith McMillan,  D3football.com national columnist and managing editor emeritus
Mount Union hung 70 on an elite D-III team last week. Two-time Gagliardi Trophy winner Kevin Burke, who will go down as one of the best in D-III history, is playing like a man on a mission. Wesley coach Mike Drass, after his own team had its butt whooped, said the Stagg Bowl might feature another butt whooping.
UW-Whitewater, meantime, has a hobbled cornerback in Marcus McLin and has had up-and-down safety play. They’ve won their past two games by 4 and 6, and last year’s 52-14 Stagg Bowl win over the Purple Raiders is a distant memory. Shoot, it’s probably what’s fueled Mount Union’s ridiculous run back to Salem.
Realistically, I see three potential outcomes. 1. Burke has a game for the ages and lights up the UW-W defense, even if no passes go near Brady Grayvold. 2. Mykael Bratchett, John Flood IV and the Whitewater defensive line dominate the line of scrimmage, not letting Burke keep on read-option runs and not allowing him time to throw. 3. Tony Koepnick, Johnny Wiederholt and the UW-W offensive line dominate like they did last year (201 rushing yards at 4.9 per carry, no sacks of Matt Behrendt allowed or interceptions thrown); Whitewater keeps the ball out of Burke’s hands and in Dennis Moore’s while the Warhawks win ugly, like the 13-10 game in 2011.
All common sense says take Mount Union. But I’ve watched every one of the Purple Power Stagg Bowls, and what these teams do against everyone else often is little indication of how the game in Salem goes. Backing Burke and his team is perfectly reasonable. But Koepnick, Wiederholt, Spencer Shier, Eli Slonaker and Connor Peters make the difference for me. UW-Whitewater 31, Mount Union 28.

Ryan Tipps, D3football.com Around the Nation columnist
Some things in life you just can’t unsee – and the total dominance that Mount Union dealt Wesley last Saturday is one of those things. The Purple Raiders are so fast on both sides of the ball, and their special teams are able to ruin an opponent’s drive almost before it starts. Several times on Saturday, Wesley was pinned at or inside its own 10-yard line. Cases like that, it’s possible to have a 60- or 70- yard drive and come away empty-handed. It requires more than momentum to overcome the kind of long field that Mount leaves its opponents.  And then there’s the defense. The Purple Raiders can get so much pressure up front, and they have linebackers and a secondary that flock to the ball so that it’s tough for offenses to stretch their legs in the least. That side of the team is so much improved from a year ago that it should completely change the dynamic of the Stagg Bowl. Hanging in the back of my mind, too, is the fact that UW-Whitewater has needed some extra magic toward the end of the season to win some of its games. Does that sound familiar? It should — it reads like the Mount Union of 2013, the one that ultimately got throttled in the Stagg. I give credit to Whitewater for having the will to win and the poise to regain the upper hand in these games, but this kind of thing will catch up to a team in the end. And the end is Salem: Mount Union 41, UW-Whitewater 24

Adam Turer, D3football.com Around the Mid-Atlantic columnist
Last year, Mount Union’s defense gave up 140 points on its path to Salem. This year, that number is 52. The Purple Raiders defense entered this season with something to prove, and the unit has shown much improvement from a year ago. UW-Whitewater quarterback Matt Behrendt has thrown four interceptions in the past three games, after tossing just three in his previous 26 starts. This year, it was the Warhawks who eked out quarterfinal and semifinal wins which were not decided until the final minutes. As Mount Union showed in last year’s Stagg Bowl, a team can only bend so many times before it breaks. With several emotional subplots on both sides, I think Kevin Burke finally gets his first win over UW-Whitewater and sends Lance Leipold off to Division I with his first Stagg Bowl loss. Mount Union 42, UW-Whitewater 34

Josh Smith, D3football.com Around the West columnist
I can’t wait to see if Mount Union continues its dominant playoff run or if UW-Whitewater’s resiliency comes through one more time. Both teams have star players on both sides of the ball and top-notch coaching, so I expect a close game. I think it’s special teams – either a big play or a crucial mistake – that swings this game. It could be as simple as controlling field position. Maybe a punt return by Tim Kennedy or Justin Howard tips the game one way or another. Or perhaps it comes down to Edward Ruhnke or Will Meyer splitting the uprights when it matters most. The Warhawks have managed to gut out close games the past two weeks. I think they find a way to do it again and send Lance Leipold off with as many championships as career losses. UW-Whitewater 31, Mount Union 28

Gary Douglas Lundberg, play-by-play for KOOL 106.5 Whitewater
Every year there seems to be a new story line.  In 2006, it was Bob Berezowitz’s final game.  In ’07 it’s a new head coach and quarterback.  The final game for Larry Kehres in 2012. And now in 2014, it’s Lance Liepold’s (and most of his staff’s) final game. I’m not sure anyone saw last year’s result coming and this year is equally intriguing. Mount looks to be much improved, especially on the defensive side. Whitewater has “bent” on defense particulary in the last half of the season. With Jake Kumerow back, the offense has found its stride again. And for the Purple Raiders, Kevin Burke is … Kevin Burke. I’ve always been an “intangible” guy and the two that I see the most are: Mount looking to payback after last year’s humbling defeat and Whitewater winning one more for their departing head coach and longtime defensive coordinator Brian Borland. It could be a wild one. UW-Whitewater 35, Mount Union 31

Frank Rossi, D3football.com Stagg Bowl sideline reporter
I originally chose UW-Whitewater to win when I co-hosted the final “In the HuddLLe” show of the season, but that was before Mount Union beat Wesley by 49. So, I decided to take a different approach this year in making my D3football.com prediction, as I have tended to perform badly in the six prior tries I’ve had. We know that in 2013, UW-Whitewater beat Mount Union by 38 points. I wanted to compare the teams through the first 14 games in each year to see what I could learn statistically:

Both teams had a better average margin of victory, but Mount Union’s jumped by nearly 22 points. This was likely aided by the improved turnover ratio Mount Union experienced. The question becomes: is this enough to account for more than a 38-point swing Friday night? It seems like the Mount Union defense has leveled the playing field — this didn’t exist in the 2013 stomping and led to the Whitewater dominance in that game.  Add the improvement in offensive efficiency, and I believe Mount Union will win going away. Mount Union 38, UW-Whitewater 27

Listen to our annual Stagg Bowl Webcast on Friday night, beginning at 5 p.m. and featuring the first reveal of the All-America team. Download the Around the Nation podcast and keep an eye out for the final D3football.com top 25 after the game, where Pat, Keith and a band of guests wrap up the season. 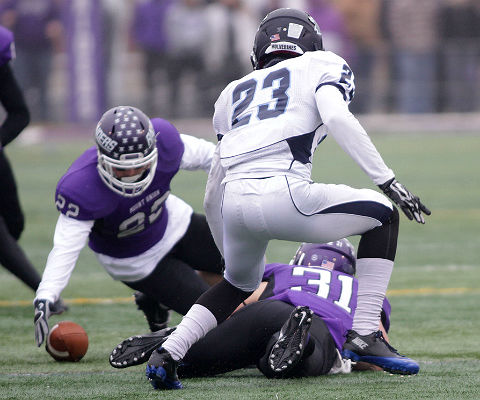 Will Hiteshue had a big impact on the Wesley offense, with two takeaways on Saturday. (Photo by Dan Poel, d3photography.com)

Making too much of one result, or one big score? Well, we probably won’t know enough about that until sometime on Friday night. But what we can tell you is what to read into and what to ignore from Mount Union’s dismantling of Wesley. Plus Keith spent some time in a little town called Whitewater, Wis., this weekend, and takes us through the much more interesting semifinal.

But hey, we know what you’re thinking. How can this outcome, UW-Whitewater vs. Mount Union Part IX, possibly be good for the sport of Division III football. There’s no sugar-coating at this point and Pat and Keith give it to you straight.