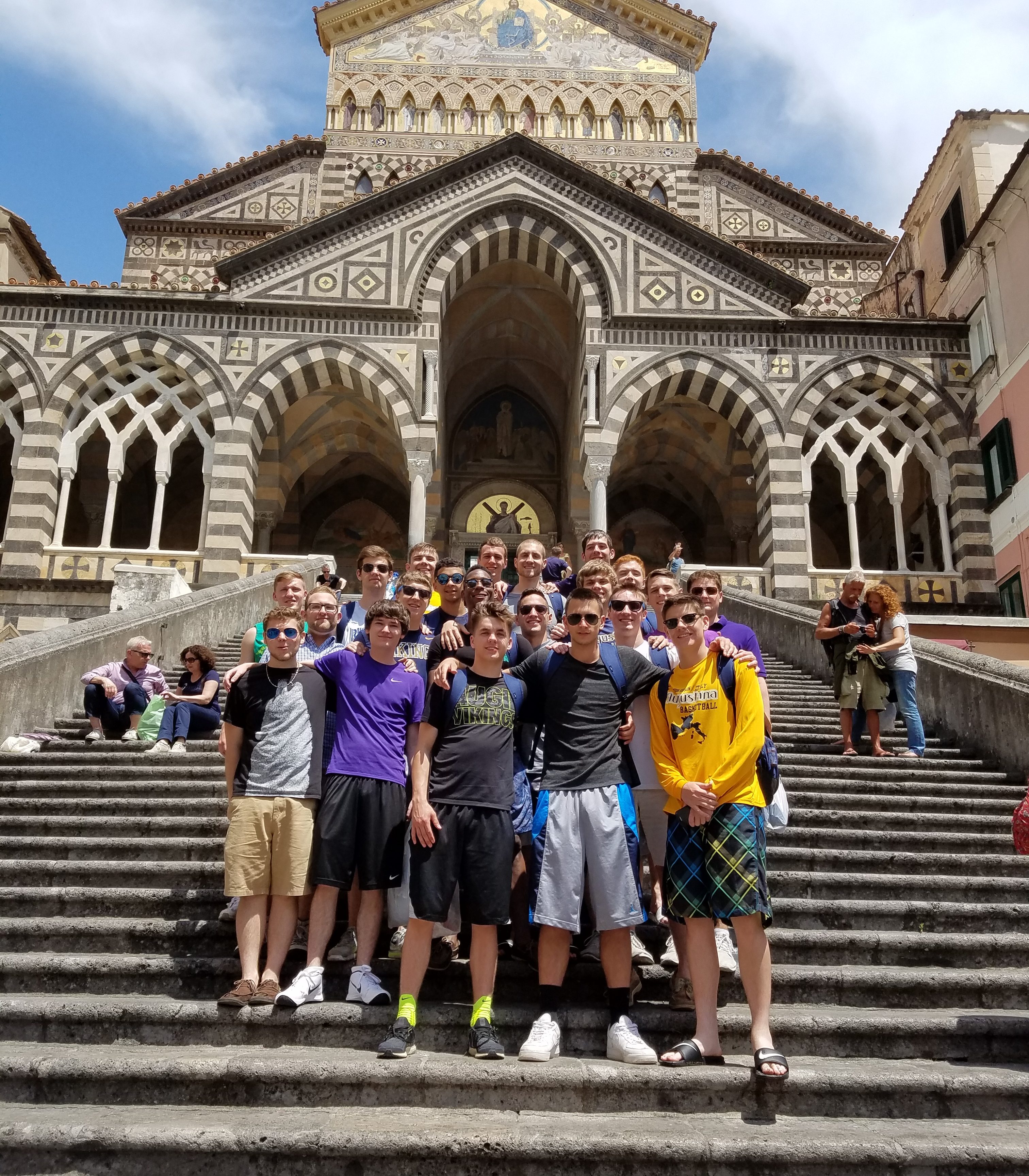 My day to write and it began with a wake-up call at 7:30 a.m. from assistant coach Jordan Delp. He told me in the most monotone voice I’ve ever heard “wake up”.

We headed down to breakfast, which was pretty good. They had croissants with lemon powder on them and it was the best croissant I’ve ever had. From there we lined up in a single file line and started our morning walk down to our bus, so we could visit one of the most beautiful coastlines in the world – the Amalfi Coast. On the busiest street in Sorrento, because of the people heading to work, our bus driver was making tight turns and not at a low speed.

Traveling on the bus we were able to see some breathtaking views. The kind that look like they belong on a post card. Seeing views we have never seen before and at some points it almost looked fake because of how beautiful they were. With no sun out there was a calm fog on the water and it made the scenery look very majestic.

When I looked out onto Mediterranean Sea I couldn’t tell where the water ended and where the clouds began and it was truly unbelievable. Driving to Amalfi Coast we ran into some major traffic congestion. At one point we almost crashed into another bus and the locals around the area helped us maneuver out and we made it to Amalfi Coast in one piece.

There was bumper-to-bumper traffic and we were barely moving. With all of the houses on the mountain it created a vertical city. This was remarkable because in city of Positano all of the houses are on a cliff. It’s crazy to see how people built a city on a mountain and with the limited technology they had it still is maintained today. We maintained a positive attitude, despite the slow going, because of all of the picturesque views we saw along the way.

When we arrived at the Amalfi Coast, we split up into groups. I enjoyed my day at Amalfi Coast with fellow sophomores Nolan Ebel (Regis Jesuit HS, Englewood, Colo.) and Pierson Wofford (Springfield Lutheran HS, Springfield, Ill.) and Nolan’s parents. We all went out to lunch at an authentic Italian restaurant. There I had an unusual dish that I wasn’t sure, if the combination went together until I ate it. It was ham and cantaloupe and it was incredible.

After lunch I met up with my roommate Dylan Sortillo (Bettendorf HS, Bettendorf, Iowa) and we went down to the coast-line to take the famous picture we always see other people take. The kind when they are in the water and the beautiful building are in the back.

We headed back to Sorrento where we finished our day doing some shopping. This is where Coach Delp made his first purchase of the trip and bought his mom a bottle of olive oil.